The problem for Pakistan has been their bowling, which has not looked penetrative enough. It is a rarity for a Pakistani side to struggle so much with the ball. The pitches in England have been absolutely flat and two new balls do not help the cause of the bowling side either. In addition to that, the fielding of Pakistan has been poor, which has mounted pressure on the bowlers.

Pakistan’s plan has also gone awry with Mohammad Aamir suffering from chickenpox. He was expected to take part in this cricket series and strengthen his case for inclusion in the World Cup squad. But now, with just two cricket games left, it feels like Aamir has missed the bus for the World Cup. In his absence, Shaheen Shah Afridi and the rest of the bowlers have faltered big time and gone on plenty.

England, on the other hand, are reminding everyone why they are going to be such a hot favourite at the World Cup. Their batting has been simply sensational and in a robotic mode, where no target seems to deter them while chasing and there is no limit to what they might set while batting first. While their bowling has not been great either, it has done enough to enable their batsmen to win the games for them.

Pakistan will not be too disheartened though. Their batting has been their weakness for a long time and with a newfound devil-may-care attitude, they have crossed the total of 350 runs twice in two games of cricket. If only they can get their act right while bowling, they will pose even a tougher challenge for England.

England are going to be strong favourites for the World Cup. Even in this cricket series, they have won two cricket games in a row. Our prediction is of the inclusion of Jofra Archer in the playing eleven for this cricket game.

Asif Ali has not been included in the initial World Cup squad. In this cricket series, he has shown the selectors what will Pakistan miss if they do not pick him in the squad. His hard-hitting batting has kept Pakistan in both cricket games in this series. Our prediction is of a good knock from him in the fourth cricket game of the series.

The last international ODI cricket game played here was between India and England back in 2018. India won that cricket game easily after chasing down 268 runs set by England. Our prediction is of the score of around 350 runs again if England bat first. Conditions are expected to be quite cool and windy.

England will begin the game of cricket as favourites again. They are the number one cricket side of the format and are expected to be very tough to beat yet again despite the limitation in the bowling department. Our prediction is of England’s win in the fourth ODI cricket game. 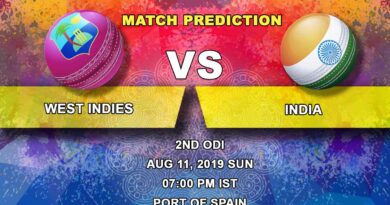