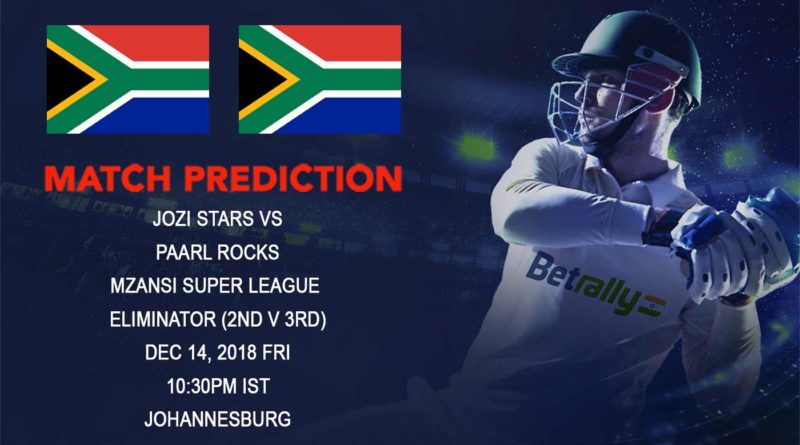 Just one encounter separates us from getting into the inaugural final of the South African T20 cricket tournament Mzansi Super League. In this Eliminator, second-placed Jozi Stars take on third-placed Paarl Rocks to determine the right of facing Cape Town Blitz in the final. The Blitz qualified for the home final by virtue of being the number one cricket team in the league stage.

Jozi Stars sealed their second spot in their last league match. They defeated Tshwane Spartans by a gigantic margin of 101 runs and earned themselves a home eliminator. Batting first, the Stars unleashed all their willow firepower on the hapless Spartans bowlers. Ryan Rickelton 45(30), Reeza Hendricks and Kagiso Rabada supported the onslaught led by Rassie Van Der Dussen, who smashed unbeaten 96 from just 44 balls. Daniel Christian provided the death blow with his bludgeoning 52 from 19 balls that included six sixes.

After AB De Villiers’ departure for 0 from two balls, the hopes of tracking down such a mammoth total were beyond the Spartans. Nino Pongolo starred with the ball as he sent six Spartan batsmen back while giving away just 20 runs. It was Pongolo, who had earlier struck two sixes against Durban Heat, to win the game for Jozi Stars. With six wins from their ten matches, Jozi Stars finished just one point short of the leaders, Cape Town Blitz.

Paarl Rocks had a tougher path to the Eliminator and ensured their participation in the cricket match with a win over Nelson Mandela Bay Giants in a straight shoot-off. Bowlers from Paarl Rocks made a disciplined start as all five regular bowlers picked up at least a wicket. Dwayne Bravo was the pick of the bowlers as he ended up with the three-wicket haul.

Bay Giants were resolved to not go down without a fight. They kept the Rocks down and chipped away at a few early wickets. Cameron Delport, however, stood strong and played a blazing knock of 84 from 45 balls to take the Paarl Rocks on the verge of entering into the Eliminator. Aiden Markram and David Wiese completed the bidding.

The tussle between Paarl Rocks and Jozi Stars will be a battle to watch out for. A win here gives a chance at the glory of becoming the inaugural MSL champions.

This is the only Eliminator of the MSL. Jozi Stars won six out of their ten cricket matches and lost four cricket matches. They have a good recent run as they have won five out of their last six matches. This, being their home cricket match, may not be a great advantage for the Stars as they lost three of their five home games. One of those was against Paarl Rocks, where the Stars went down by six wickets.

Jozi Stars have found the team combination that has been successful and will stick with it. The only change that they made in the last match was the inclusion of Beuran Hendricks in place of Dwaine Pretorious. Hendricks should retain his spot in the cricket team. Ryan Rickelton naturally replaced Chris Gayle, who has returned to West Indies.

Henry Davids gained match fitness and was drafted back in the Paarl Rocks side for the last match while Patrick Kruger had to miss out. Apart from that, the Rocks have been consistent with their cricket team. The likes of Delport, Du Plessis, Dwayne Bravo will grab the eyeballs in the Eliminator.

There are plenty of explosive batsmen from both sides on the show here. Reeza Hendricks has shown his potential with two successive hundreds. Ryan Rickelton has been splendid at the top. FAF Du Plessis has been strong headed and Henry Davids will be eager to pitch in with his contribution. Still, one batsman who has soared above all of them is Rassie Van Der Dussen. He is the current leading run-getter of the tournament and we expect another stellar cricket knock from him.

There have been five MSL cricket matches scheduled at this cricket ground so far. The side batting first has won thrice and has lost on two occasions. We have seen the scores in the range of 230 twice and the average score batting first here is 192. The ground is known for its short boundaries and fast outfield. It will be another run-feast.

A win here takes you straight to the final cricket match of the tournament. Both teams will give their best shot. While Jozi Stars have been batting brilliantly, their batting unit is fragile, whereas Paarl Rocks have a lot of experience on their side. Despite being the away team, Paarl Rocks will be the favourites to clinch this encounter. 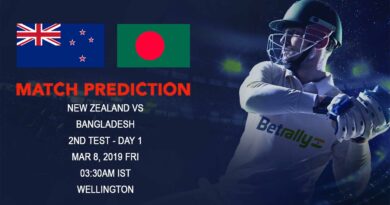 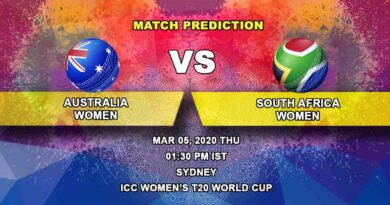 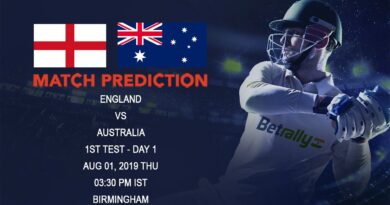 July 30, 2019 Saurav Comments Off on Cricket Prediction The Ashes – England vs Australia – On-top-of-the-world England set their eyes on the Ashes